Overlooking the Village of Heptanstall and Habden Bridge lies two Churches within the same grounds one very much in use and the other a ruin.

The Church of St John the Baptist in Halifax was built around 1095. It was meant to provide for the whole Parish, which was the largest in England at 150 square miles. It must be 12 miles or more  from Todmorden to Halifax and some parts of the Parish would be further away. It was the only place to have your child baptised, to marry and be buried, to say nothing of regular worship. Hardly surprising that children went unbaptised and marriages happened in the market place, ( the "brush" marriage).  The original Chapel at Heptonstall was the first built to alleviate this problem, as a chapel of ease to the Parish Church of Halifax. It served the five townships of Heptonstall, Erringden, Langfield, Stansfield and Wadsworth.

The chapel was erected between 1256 and 1260 and was dedicated to Thomas a Becket who was murdered in 1170, became a saint in 1173, and was a popular symbol of resistance to state authority. It had a chancel, a south nave, which is still standing, and a tower. Much re-furbishment occurred in the 14th and 15th centuries and eventually there were two naves, two aisles and two chantry chapels as well as a tower. It would have been a built quite low, so as to avoid the worst elements that the Pennine weather can produce.
In 1440 William del Bryge of Heptonstall left 10 marks for bells to be made.

Still to be seen is the tower, which was heightened by adding a new bell stage in the 15th century, built upon the 13th century base, and an original stair turret. Just before the Reformation in the mid 16th century a huge development took place and the floor area was almost doubled and a three-decked pulpit was positioned to serve the two naves. During the Civil War, Heptonstall was a Parliamentarian village and when the Royalists set up their guns ready for attack, the church was covered in sheepskins to protect it from cannonballs.

The 17th and 18th centuries continued to see the population of the area grow and with it the congregation also grew in numbers. To accommodate the people, new galleries were built and in 1617 North and South Lofts were erected.

The church didn't rate very high in John Wesley's opinion, for he had preached here on several occasions and he is noted as saying in 1786, "it is the ugliest Church I know". He mustn't have noticed the beautiful view, which alone could make up for any man made ugliness, if indeed it was as ugly as he said. It now seems a very romantic and impressive place but maybe that is due to the nature of the ruin, the gravestones, and the preserved village setting. I have the feeling that it was by this time tolerated by the locals rather than loved and there was little concern for it's state of disrepair.  After all the whole area was a hotbed of non conformity.

The 19th century began and the church could seat 815 on the ground floor and 300 in the galleries. It must have been a sight to see it packed with parishioners, the vicar in full voice and then the huge congregation joining together in one voice to sing praises to the Lord.

By now the fabric of the old building had begun to deteriorate and in 1847 a great storm destroyed the West face of the tower and plans were made to replace the whole structure. This plan was scrapped in favour of building a new church, and the old church continued to be used until 1854 when the new one was finally finished.

One startling discovery was made after the storm, when the fossilised remains of a cat was found in the rafters. It was thought to be thousands of years old and caused such a commotion and to do that it was taken to the Cross Inn and displayed in a glass case. It stayed there for many years but disappeared in 1958 in mysterious circumstances.

In 1868 further demolition to the old church took place, this time man was responsible, not the elements. As the historian John Travis was walking around on one of his journeys, he noted that the slates had been removed and men were busy taking down the oak roof. It was then taken to a foundry in Hebden Bridge, where it was sold off for firewood. It is a question of morality as to the correctness of selling something that has been dedicated to God. As is usual, money wins over morals.

The new church was built by subscription at a cost of £6.600, in the Victorian Gothic style. The building was made from local stone, which was taken from the nearby quarry at Hell Hole. The foundation stone was laid on the 15th May 1850 and the church was completed by 1854. The Rt. Rev. Dr. Longley, the Bishop of Ripon, consecrated it on 26th October 1854 and it was dedicated to St. Thomas the Apostle.

The font from the old church was removed to the new one and is still in use. A remarkable and unusual eleven-sided one, lined with lead and given a new cover, which is appropriate in design and in keeping with the décor of the new church. The arms over the door of the church are the royal coat-of-arms of King George III (1760-1820) and were also taken from the old church.

Also preserved from the old church are an oak table, an oak chair dated 1690, and a long settle.
Looking at the clock in the tower, you will be seeing the one that was once in the now ruined church from 1809 until 1854, at which date it began a new lease of life as timekeeper in the new church, without having to move very far. It was made nearby Sowerby Bridge.

The church, being built where it was, open to all the elements, made it inevitable that sooner or later nature would play a part in the story and on the 5th April 1875 it was struck by lightening, which caused the south west pinnacle to come crashing down onto graves below. The roof was badly damaged along with the tombstones. Money was raised by public subscription to pay for the repairs which cost £200.

The pinnacle now rests by the side of the church and is inscribed: This pinnacle was struck down by lightening from the south west corner of this tower on April 5th A.D. 1875. The interior of the church was constructed in the early 1960's from money made available by the legacy of Mr. Abraham Gibson who had died in 1956. The original Victorian interior was badly affected by dry rot, so Mr. Gibson's contribution was much welcomed. It is a very non-traditional interior, being an adaptation of a traditional medieval style converted into a 20th century plan.

A surprising find at the tower end of the church is a copy of Leonardo da Vinci's "Last Supper". The original of it is still to be seen in Milan and it is an amazing story of how this copy came to be hanging in a church, in a village high in the Pennines, so many miles away from Italy.

Gringaschi painted the copy for the Italian government in 1905. They wanted one as the original was beginning to fade and lose some of its beautiful colour, and the wall on which it was painted was shelling. They wanted people to be able to see both the copy and the original and so be able to view the full beauty of Leonardo's fresco, as it had first appeared, so they hung them side-by-side. In 1906, a wealthy Hebden Bridge man by the name of John Sutcliffe bought it for a large sum of money. This was only after special permission had been given by the Italian government for the sale to take place. It was bequeathed to the church by one of the late Mr. Sutcliffe's relations.

Calling people to church by the ringing of bells has echoed over the hills and valleys from Heptonstall church for over 500 years. Additions to the earlier bells of 1440 were six dated 1742 and 1748, and were transferred to the new church. They were recast in 1911 with the addition of two new bells to make a full peal of eight. They weigh in total over four tons. The framework, in which they are housed, is regarded as one of the finest in the country.

The old church is still there, in ruins, and a memorial to times past. Times that we know little about, except from old manuscripts and the like. Would that we could tap into it's walls and perhaps hear again the congregations from long ago, singing and praying, being married, buried and baptised.

The graveyard, which surrounds the two churches, is large and is said to hold over 10,000 bodies. One indication of how crowded it is is seen by the re-use of gravestones. There are inscriptions on both sides of some of the stones with one set of inscriptions face downwards. Only Halifax and Heptonstall could be used for burials until the 17th century. The earliest dated stone is 1501, but burials have taken place here since the 1200's, and many of the memorials are in Latin.

David Hartley of Cragg Vale Coiners notoriety is buried here. He was hanged on 8th April 1770. The fascinating story of the Coiners can be read in "Clip a Bright Guinea" by John Marsh. 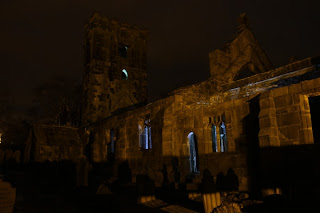 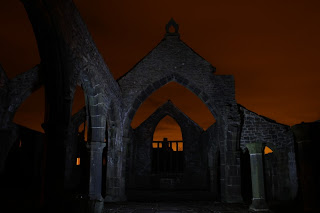 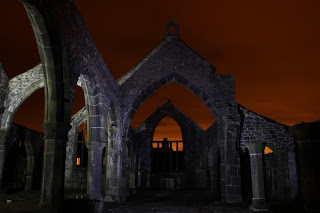 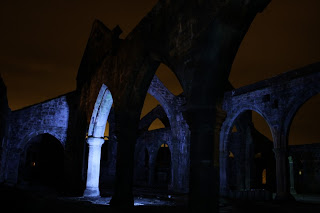 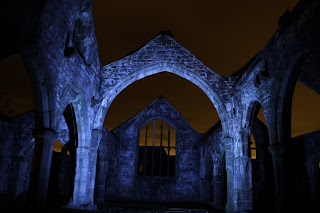 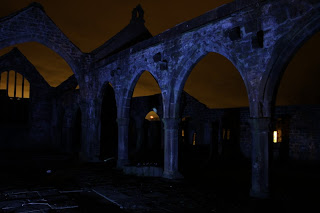 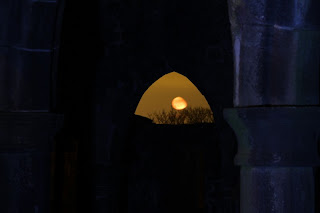 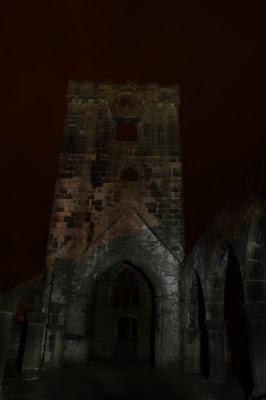